No Widgets found in the Sidebar Alt!

UPDATE: BLACK FRIDAY & CYBER MONDAY SALE!
Sam is offering his two books Frontier Preacher & Frontier at Three Rivers for $15 shipped! To order the books do NOT go onto amazon. Instead go to his website below and make sure to use paypal
www.samhossler.com
I was recently asked by Granny Apple Publishing to review Frontier Preacher and Frontier at Three Rivers written by Sam Hossler. Both books are incredible, and I enjoyed reading them very much. Sam has a way with history that just makes reading it more enjoyable. It’s like the pages come to life right in your hands. I had a hard time putting the books down once I started reading them.

Frontier Preacher: The Life of John Corbly, 1733 to 1803 by Sam Hossler is a historical depiction of late 17th century history in Pennsylvania where John Corbly spent most of his adult life. Corbly, an Irish immigrate begun his journey as an indentured servant for Mr. Applegate, a Christian who teaches Corbly the skill of farming. Corbly is released from his servitude 4 years later, and becomes a preacher. During his service with Mr Applegate, Corbly becomes an evangelist. He meets his first wife Abigail, a Quaker forbidden to marry outside her closed knit circle. He marries her anyway and poor Abigail is cast out of her church. Corbly and his family are persecuted for their religious beliefs, and searching for a new start in life is encouraged to move his family to Pennsylvania where land and prosperity is promised. Instead he finds a wild terrain with hostile Indians at war with the poor unsuspecting settlers, and a government who refuses to help but increases tax that the poor settlers cannot pay. Corbly, a preacher who is devoted to a peaceful life, becomes a risk to the government and is soon captured and sent for persecution. Through all of life’s struggles as a poor settler, Corbly stays positive. He establishes many churches, makes many friends, and continues to preach his religious beliefs until his death.
To Purchase Frontier Preacher 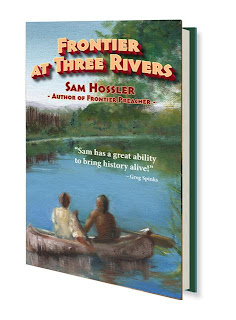 Frontier at Three Riversby Same Hossler is another great depiction of action packed history. Set in early Pennsylvania at Three Rivers. The book is split into two parts with the first half telling the story of early settlers under attack by a band of war Indians led by Ottawa leader Chief Pontiac, who was desperate to purge the area of white settlers who were taking over his land. There’s gore and blood. White settlers are tomahawked, scalped and tortured under Chief Pontiac’s watchful eye. It gets so bad that a group of brave men called the Pennsylvania Rangers band together to fight the ruthless Indians. During the second half of the book it is 10 years later, Virginia starts demanding tax that the settlers can’t and sometimes won’t pay. There is a mini revolutionary war going on between the settlers, John Connolly who is hired by Virginia to claim the tax from the settlers, and the Native Americans who want the settlers gone and their land back. There’s blood, gore, and hostile settlers everywhere. The settlers start fighting the Virginia tax, they target anyone associated with Virginia’s government. No one associated with Virginia is safe. There is political uproar everywhere the political tension in the area between Virginia government, the settlers, and the Indians.
To Purchase Frontier At Three Rivers

My Thoughts on the Darla Neugebauer Controversy #3Pancakes

This site uses Akismet to reduce spam. Learn how your comment data is processed.